Psychic with Sylvan Esso and Friends 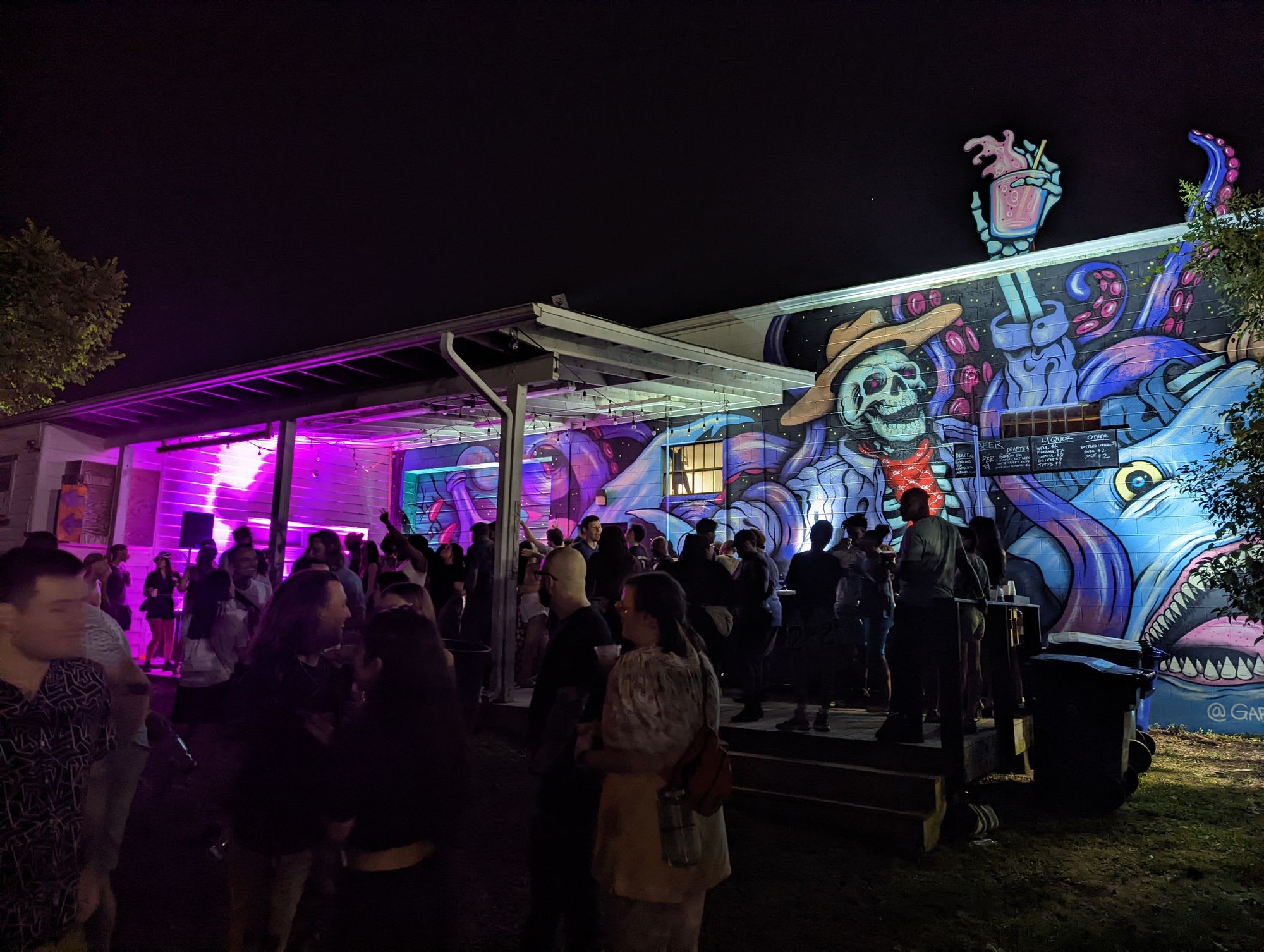 Electronic duo and local Durhamites Sylvan Esso played a series of shows at the old durham Ballpark between May 19-22, 2022. A few thousand people rolled in from out of town to see them, Yo La Tengo, Little Brother, and a host of other great artists. It was the biggest social gathering and music experience in Durham since Moogfest left town and Covid-19 moved in. Our space, PS37, hidden in an alcove across the street from the old ball park, played a small role in what was a pretty big weekend for Durham. This piece, written on Monday May 23rd, the day after our last event is meant to serve as both a means to express our gratitude to all of the people who put in extraordinary amounts of work to make it possible as well as a call out to the future that we hope to create and be a part of.

First and foremost, thank you to everyone who worked outside in the heat throughout the weekend: the bar crew, the door crew, the sound crew, the people who did a little bit of everything. It was disgusting, the hours were ridiculous, and we got thrown a couple of wicked curve balls. Our gratitude is eternal. Dani, Megan, Bruce, Neil, Patric, Sarah, Paul, Jaffar. Ya’ll are the rockstars. Thanks to Gabe Eng-Goetz for finishing the mural before the weekend started. It is truly next level. This is probably a touch biased but as friends and fans we all think it’s your best work by a long shot ;). It genuinely transformed the outside of the space and pushed us a significant step closer to our long term vision. On that note, Amy’s crew that was working on the Psychic Hotline pop up deserve a ton of extra credit. We spent multiple 12 hour plus days sweating it out with them in the warehouse before the weekend started. They turned our warehouse into a record store pop-up and just all around killer vibe. In the end what everyone did was remarkable and we truly hope we can get the squad back together as soon as possible to do more weird things on the premises.

As for the parties themselves, I think pictures will tell a better story than I ever will (check our insta) but I’ll say that the music was loud, the energy was through the roof, and no-one that was there wanted to go home except those of us who had been there way too long and were on the verge of collapse. Which really brings us to: Friday night at 4am after one of the shows I was laying in bed, the heels of feet killing me from a 16 hour day and I was legitimately questioning whether or not my body was going to hold out for two more full days and nights working outside in the heat. My mind was fluctuating between exhaustive and depressive thoughts when one of my favorite memories occurred to me.

In Berlin about 10 years ago while on tour with Shirlette Ammons, after one of our shows a couple of new friends we had made offered to take usto an after party. They led us to an abandoned train station, and from there down into an underground tunnel. After walking some ways through the darkness the sound of a pulsing bass drum slowly began to emerge. A few more turns in the darkness and we came round a corner, 25 yards in front of us in the tunnel was a wall of people, surrounded by vibrant walls of graffiti that were swimming in a layer of shimmering lights. We fought through the masses towards the center where we found a small table holding nothing but a DJ controller and a drum machine. Behind the table was a single DJ and behind the DJ, a second wall of people coming from the other side of the tunnel. The entire scene formed some kind of mirror image in the middle of this dark corridor. We danced in that tunnel well into the next morning. It sits amongst the most memorable nights in my life. It was the combination of unexpected lights in the dark, of finding something hidden, and of sound and movement carrying us into a new place.

While desperately trying to fall asleep, I thought about that night in Berlin and how much it still means to me. Hours earlier  at PS37, I had either overheard or was told on multiple occasions something to the effect of: “I can’t believe this is here. This is amazing. It’s like old Durham, but more dialed in.” I thought about the things I had seen on the dance floor in front of Gabe’s mural earlier that night and the amount of people who had expressed their gratitude throughout. I thought about how special the space looked, and I realized what I had always hoped, that for one weekend PS37 was bringing people some of that same kind of magic that I experienced in Berlin.

That was all it took to forget about my own physical discomfort. For most of us physical pain will subside, but how many opportunities do we get to create an experience that someone might occasionally lean on for hope and wonder?

We are fortunate to have this space that we at PS37 believe has the ability to create that kind of magic. And this weekend working with all of these beautiful fucking people helped bring that vision closer to existence. Everyone deserves a safe space in their community to have an unforgettable experience.  And I feel that as tenants of such a space in such a quickly changing part of town, that it’s on us to say that: old Durham isn’t dead, it’s just a little more hidden.

See you at the next one.

Shout-out to:  Sylvan Esso, Glow Management, Psychic Hotline, Gemynii, Raundhaus crew (plus Kamus Leanardo and DeFacto Thespian), QueenPlz, Grrl, Yo La Tengo, The Floor, Part and Parcel,  Rang Productions, our wonderfully dirty but beautiful city Durham North Carolina, everyone who came out and partied, and again all those who put in so much work making it possible.

Your monthly email highlighting what's happening at PS37 in the upcoming month, along with some highlights from last month. No SPAM ever... unless it's going in your mouth.