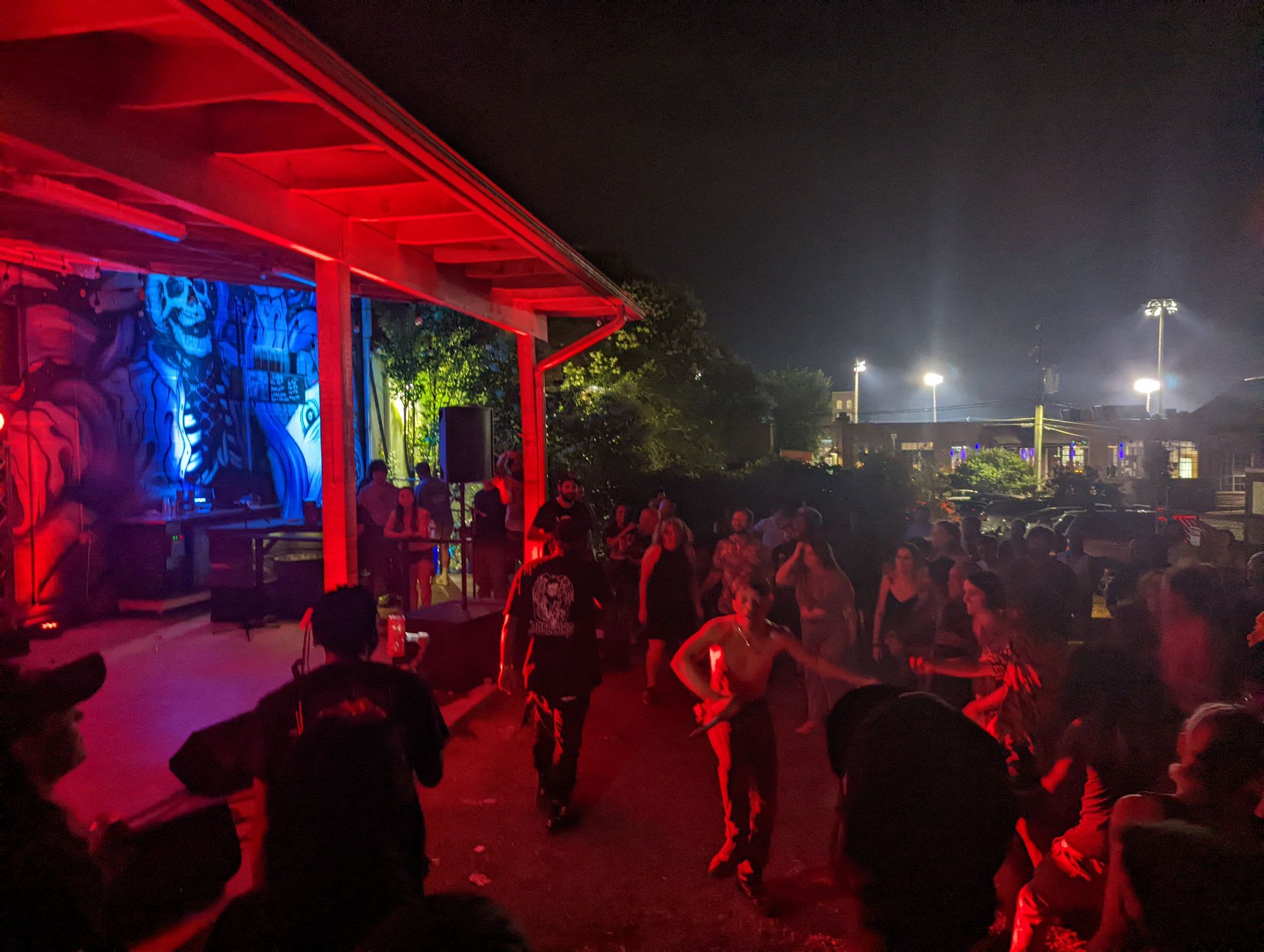 We've been trying to get Rang to DJ a party here since he joined as a partner here in 2021. We had almost given up hope… but alas, after a ninth inning DJ scratch, there was a message in group text, "Maybe I’ll do a super secret." If we’d have known we just needed to have a DJ cancel we’d have just faked it. There was a human in lights, a pretty epic dance circle, and a human in lights inside a pretty epic dance circle. Pretty much what you’d expect from a Super Secret Dance Party. And i mean that in the best possible way.

We were so pumped about this show. We’ve been thinking about this blender series since the beginning of the year. And to kick it off with Durham Hall of Famers Jooselord and Tooth made us all super proud. Their energies ruled, the music was absurdly tight from all parties, and a huge percentage of the crowd stayed and rocked out to both shows. Tooth crushed like a pile of old cars caught in the way of a massive barge and Joose’s combination of satire, wit, energy, and angst fueled the night like some kind of twisted tequila cocaine slushy. We're absolutely here for it.

The entire night was truly Durham as fuck. A few highlights:

Tooth - “This is a song about being fucked by a horse.” The chorus was a chant of “death by horse,” paired with the visual of an arm slowly being engulfed. It was at once both very dark, very funny, and absolutely bone crunching.

Tooth’s singer Jme Guptil’s speech about Durham and being a music fan, a Durham fan, and how it was special for him to be playing a show with a local rap artist as a fan of all genre’s of music not just metal.

Joose between songs, “For one night we all get to be the white man!” and “Every single government entity is a gang…. Everybody gang bang.” Also, Joose and co performing from the crowd and just bringing the moshpit energy all night long.

3. The Floor’s Hangover Brunch is always a vibe.

From DJ’ing out of the garage to La Republica Food truck, Sundays with the Floor is quickly turning into one of the most chill spots to have a bloody mary and some loaded Nachos.

For Blender 2 we are going all out -we are teaming up with ChurchKey Records and bringing  one of the area’s best lyricists and dear friend of the fam, Shirlette Ammons and band, along with the always 11 energy of Spider Bags. It's gonna be real hot, but it's gonna feel real good. Oh and we are also gonna grill out and throw out all kinds of fun summer festivities. So come eat some dogs (yes, we'll have the veg).  We are hoping this is going to be an annual PS37 midsommar party. LFG!

See ya soon! Also check out the recap video that the cool, sweet, and gracious Cat Cortes put together!

Your monthly email highlighting what's happening at PS37 in the upcoming month, along with some highlights from last month. No SPAM ever... unless it's going in your mouth.